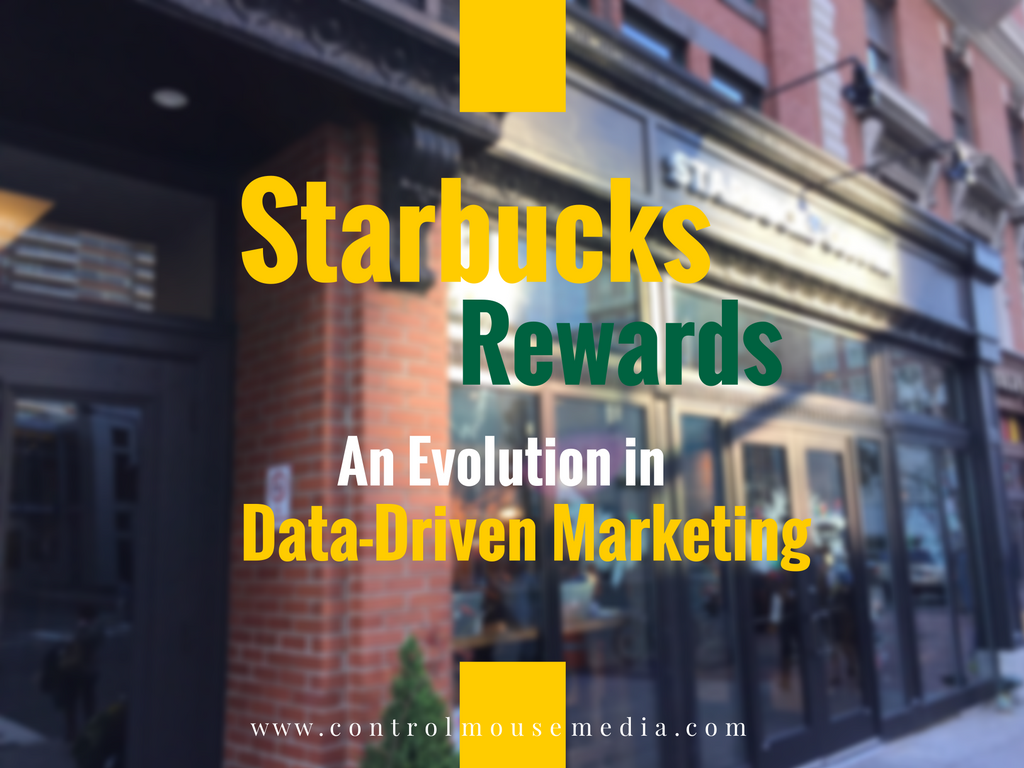 While lots of businesses have rewards programs, the Starbucks Star Rewards program is nothing short of spectacular, from a marketing point of view. It’s innovative, it’s completely opt-in, it’s (fairly) soft-touch, it rewards their best customers, and it seeks to know those customers at an individual level. But the thing that’s amazing is that it does this all at scale, using a data-driven approach.

Using data to do better targeting is expected of today’s marketers. But what Starbucks is doing takes it to the next step – they are using data to know their customers’ preferences and habits, and using them to create a feedback loop that amplifies buying behavior. It serves as a great lesson for anyone in marketing today.

Before we get started looking at the program, I should tell you that I am a Starbucks shareholder. Even though it’s only a small amount of shares, I still believe in full disclosure.

Starbucks Rewards: An Overview of the New Program

Back in April 2016, Starbucks made a big change to their popular Star Rewards Program. Before we get started, let’s look at the shift from the old program to the new one, to put it into context.

A lot of people were irritated by this change. But Starbucks seemed to lean into their best customers, even though that might be counterintuitive (because it’s more expensive to reach a free drink). After all, the new program rewards people on what they spend, not what they spend it on. People who spend the most get the most rewards points. And Starbucks’ best customers now get rewarded for food purchases too, not just drinks.

However, the fact remains that it’s now a higher threshold to unlock a reward. To make the math easy, let’s say it’s $4 per drink.

*The old system had a loophole as well. You could “beat the system” by purchasing 12 single espressos (at $2 each), so spending only $24 to get a free $7 drink. Now you can’t do that.

So far, what I’ve described is a fairly standard rewards program, with a tweak in April that only seems to benefit the company. Yawn. Standard corporate operating procedure. If the story ended there, it would be pretty boring – and not unexpected.

That’s where the innovation kicks in. Layered on top of a fairly straightforward rewards program is an algorithmically-generated series of individualized incentives to accelerate earning stars. It comes in the form of bonuses, each one tailored to a particular customer’s preferences and habits. Not to a customer segment, mind you – but the actual individual.

This is the part that I’ve really been interested to observe, because it’s absolutely brilliant data-driven, algorithmically-tuned marketing.

The Power of Creating Customer Habits

There are two things that drive the rewards program, from Starbucks’ point of view:

Quoting from The Economics of a Starbucks Cappuccino Grande:

But they’ve also gotten 3 other things out of you too:

I would contend that the habit part is the ultimate prize for them. But for today, they’ll take the data. Tomorrow, they’ll use the data to promote that habit. Their system appears to be finely tuned in service of that goal. This is the good stuff, so check it out.

With every purchase using the Starbucks app, you leave a data trail.

They use this data to “gamify” the rewards system – and it’s all individualized. I have proof of this studying how Starbucks treats my wife and me differently. She’s a much more regular customer than I am. Appropriately, they rank her higher than me in their database. You would never see that outwardly in any customer interaction, but it sure plays out in the data.

The gamification looks like this: They offer special bonuses and other “challenges” via the app. They notify you through the app – or will send you an email alert if you’ve opted in.

For instance, they know what days of the week you purchase, so they might offer a “Double Star Day” to you to get you in the store on a day you’re not usually there. Then you get 4 stars per $1 spent, not 2 stars. 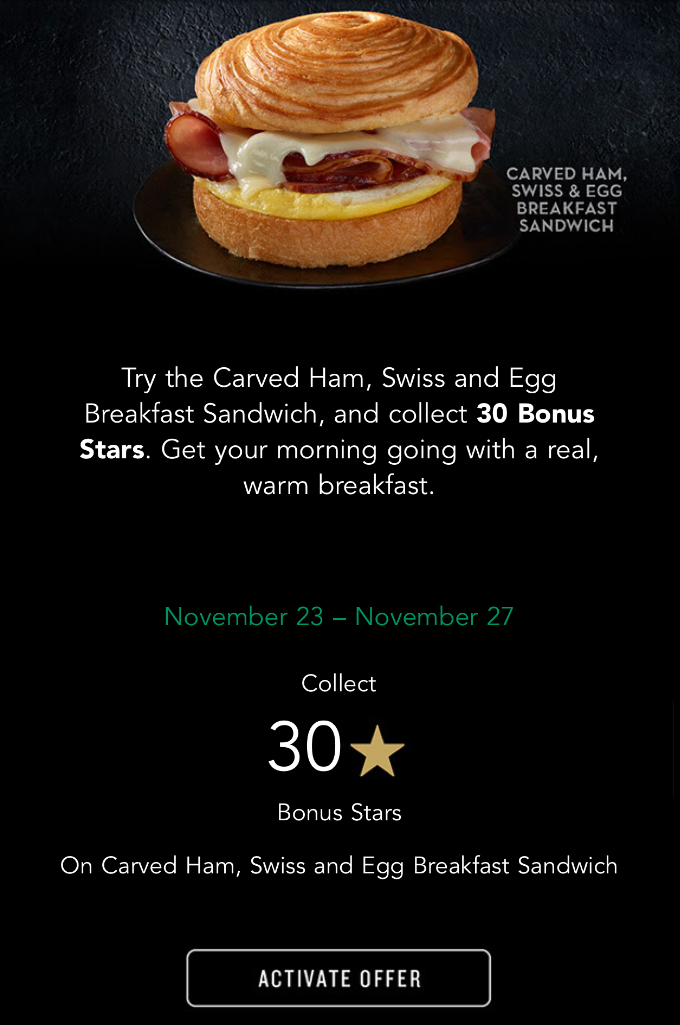 Incidentally, they use this device (it would seem) as the lowest level driver – in other words, for their mid-tier customers. After all, their most regular customer don’t need a basic incentive to come it. They’re already exhibiting this behavior.

Other bonuses either reward behavior that they want to promote – preordering, for instance – or getting you to try new products:

For the “Star Dash,” the algorithms look different for different customers.

This is a clear indicator that they know her patterns and how they differ from mine. They then use this data to tune their incentives to capture any incremental customer value above current spending.

Here’s another recent comparison (between my wife and me): 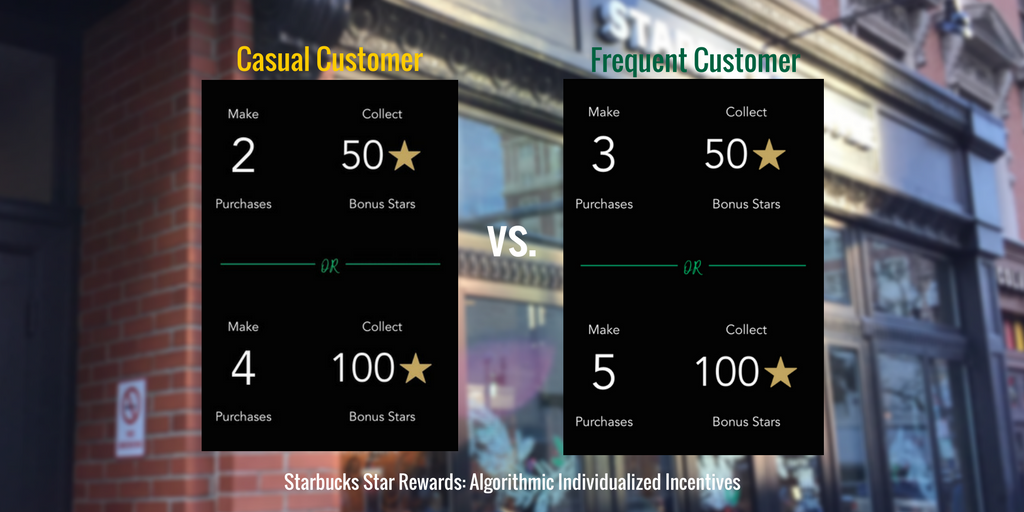 Again, you can see that incentives differ between a casual customer and a frequent customer in the Starbucks Star Rewards program.

There are also “Bonus Star Combinations,” where they are clearly trying to 1) get you try a new product, and 2) bet on the chance that you’ll form a new habit – if you like the product, that is. 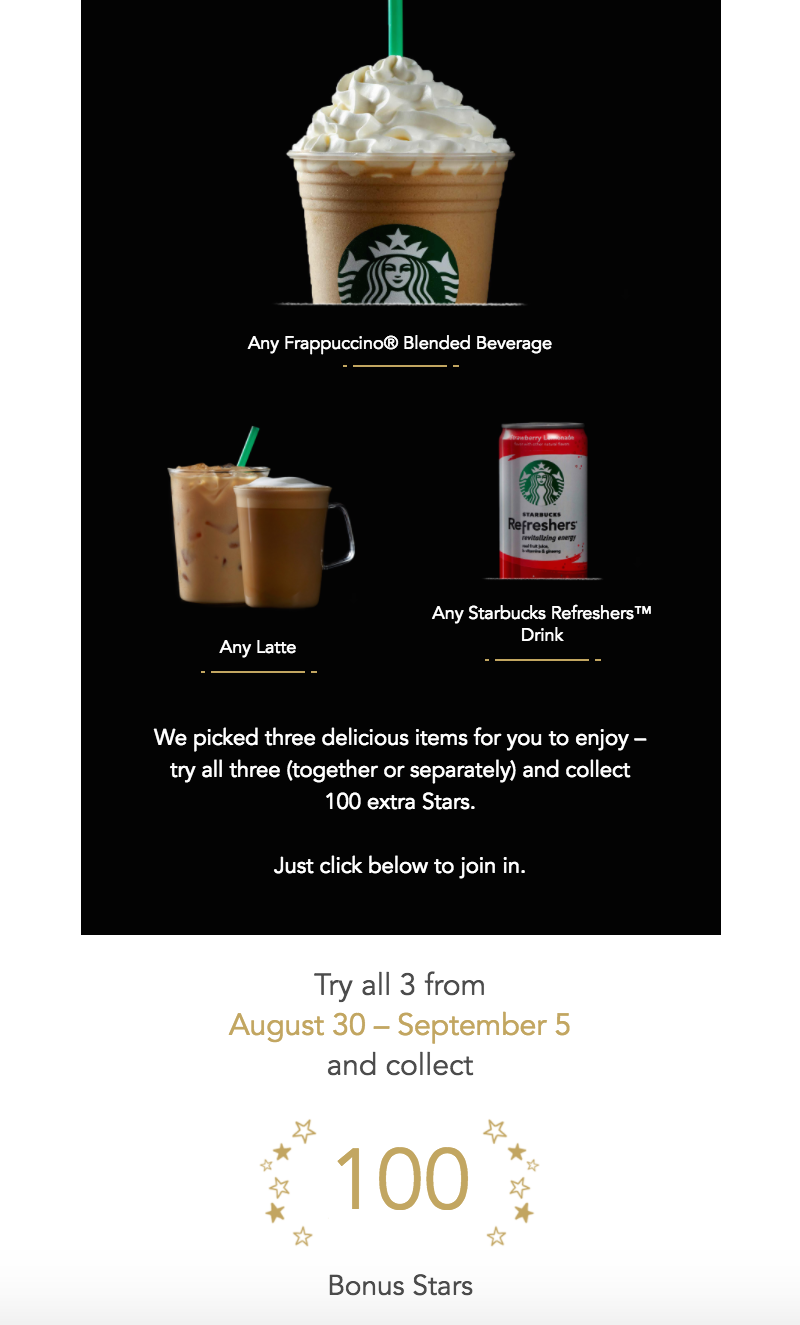 For instance, the challenge might be: Buy three items over the next week and earn 100 stars. Here’s the amazing thing though. First, they know what you like because they know your prior purchase history. So to motivate you to try this challenge, they put one or two things in the challenge that they know you already like.

They have my attention because they put things in the challenge that I might order anyway, and they motivate me to purchase something new that I might never have tried – the “Refresher.”

And of course, these challenges look different to different customers.

The Starbucks Algorithm In Action 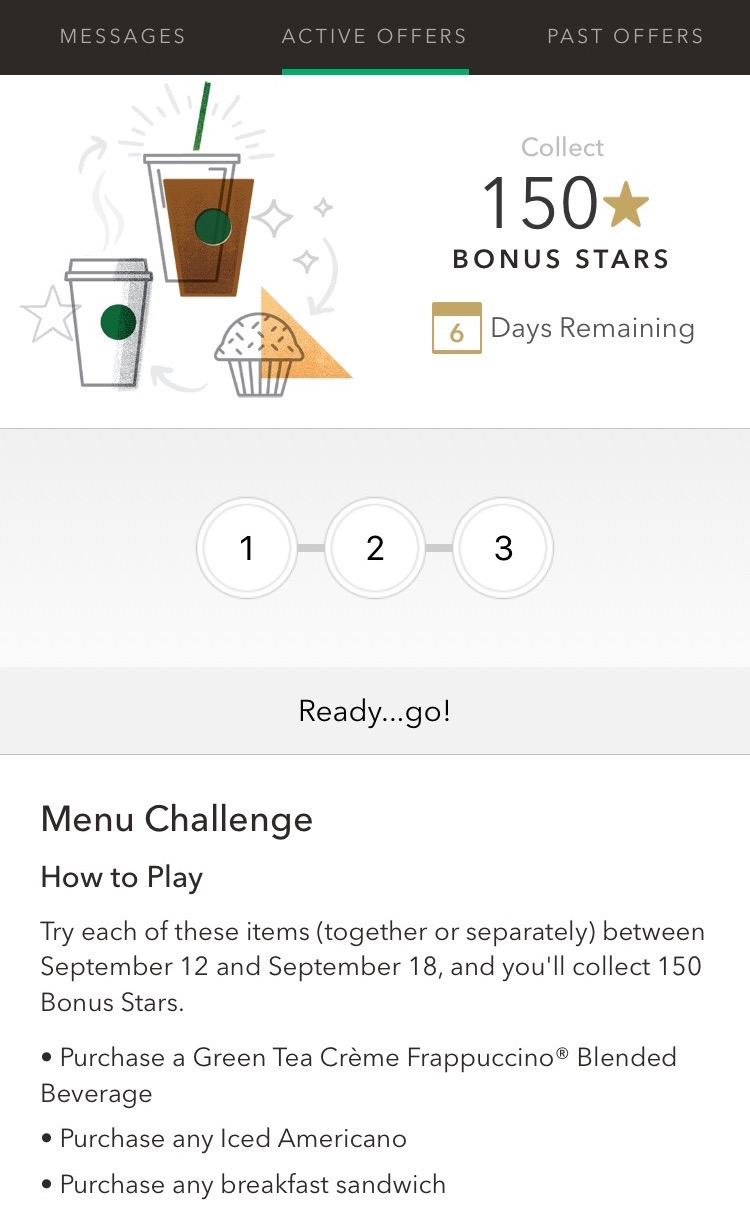 Updated September 2017. Speaking of bonus star combinations, I noticed another thing recently in how Starbucks uses incentives to lure back lapsed customers. I hadn’t visited a Starbucks store in awhile, and had ignored a lot of the Star Challenges that I received via email. After a number of weeks had passed, I got the following “Menu Challenge,” to purchase three items that I had purchased before: A green tea Frappuccino, an iced Americano, and a breakfast sandwich (see inset image).

They were offering 150 bonus stars – more than enough for a free drink. It’s notable that the offer is for items that I had purchased previously. 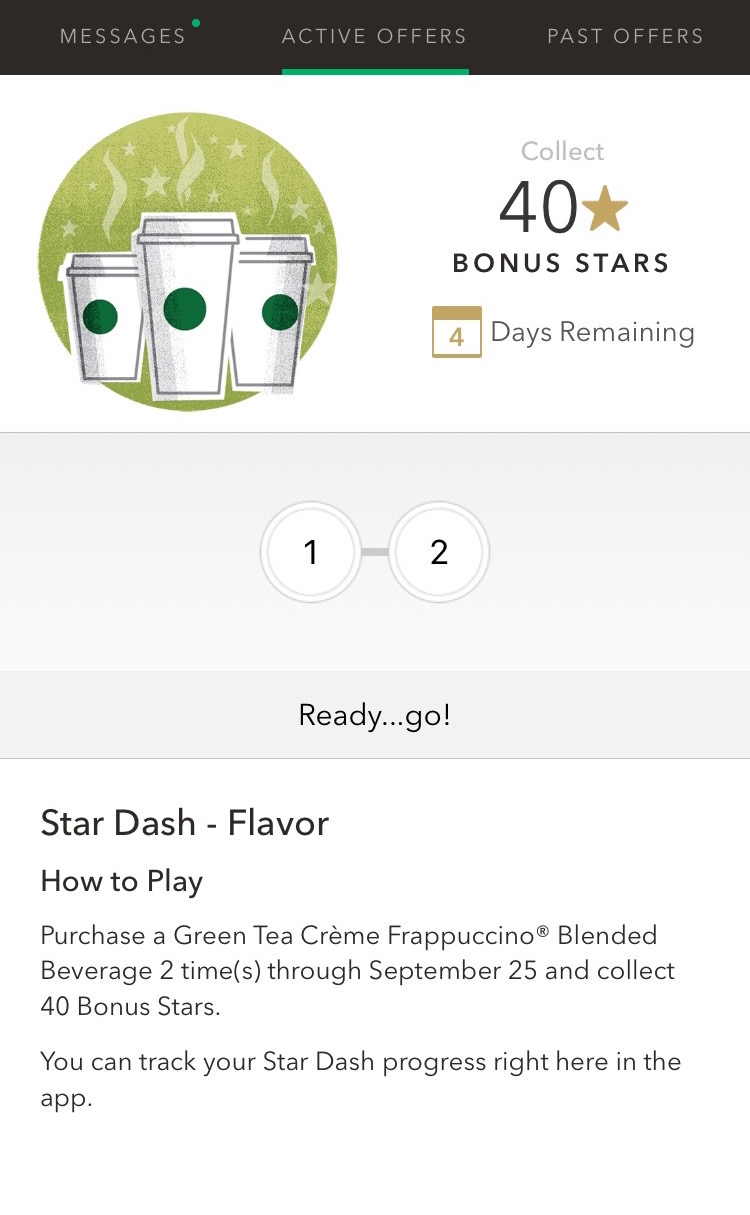 In other words, they could reasonably assume that these items were ones that I liked. I completed the challenge, got my 150 Starbucks Rewards points, and the Starbucks algorithm kicked into action.

A day or two later, I got my next Starbucks Star Challenge – but this time, notice the difference (see inset image). The reward is reduced: 40 bonus stars for purchasing 2 green tea Frappuccinos. They focused on an item I purchased previously, but you can see that they felt like they didn’t need to incentivize it as much. If I ignore this Star Challenge, I’m sure that the algorithm would “juice” the next offer.

Know Your Customer at an Individual Level

Starbucks is doing this at scale with data. They have to be extremely careful though. It’s easy to cross the line with marketing automation, and undo all the work you put into a customer relationship. This is true for any business, which is why I always recommend that you build any marketing automation processes with small steps, little-by-little. It’s easy to over-design it from the start and do more harm than good.

Now, if Starbucks was only using this approach I’ve described here, it probably wouldn’t be effective. As a rule, I’ve found their customer service (via email) to be exceptional. And even in-store, they are usually pretty good at recognizing their regulars. When I lived in New York, I worked on 6th Ave at 48th Street. By pure coincidence, my sister-in-law worked in the same building. A few times a week, we would do a “Starbucks run” to the store right there in lobby at about 2 pm. The staff there knew our names, our drinks – and it was apparent that it was not just the two of us, but everyone “on line” (as they say in NYC).

It feels personal, but not too pushy. It feels like there’s a relationship, which is important because as customers, we do business with people we like. These cues, whether in-person or in-data, demonstrate a relationship of some sort. It has to built on mutual respect. If you manage it properly, with care – it can make you more favorable.

Can we outsource the entire customer experience to data? Of course not. But as one facet of your marketing strategy, it can contribute a lot. Compare this observation about Starbucks to television advertising. Starbucks knows you by your data, and then the customizes their marketing to you specifically. Not to you, the demographic. Not to you, the public in general. To you the person – and your actual buying habits.

This is absolutely incredible. They are:

You get a little “charge” when you get a reward. It feels good – a little dopamine shot with your espresso shot.

Applying This Lesson to Your Small Business

You might think, how can a small businesses do this type of thing? Strapped for time and money – how can you put this type of thing to work for you? It’s just a matter of scale. You probably can’t design a complete rewards program (though you see independent cafés do this all the time), but you can start doing some simple segmenting and marketing automation to get started. 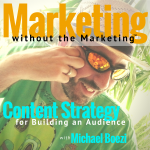 These two things – segmenting and automation – are massive topics, and my intent is to get into this more in upcoming episodes of my podcast, so please subscribe if you haven’t already. You can find a podcast version of this post here: Know Your Customer: Using Data-Driven Marketing.

If you really want to dig deep on these topics, I have an online course with a ton of material on Segmenting, List Building, Automation Sequences, and more – as a part of an entire content strategy. The course is called CreateBiz, and it’s specifically for creative professionals. My subscribers get a discounted rate by using the following link: https://controlmousemedia.com/mwm.

An agent, producer, or publisher has to make decisions based on money. If they invest in you, will they get that investment back? Will they make a profit? If the answer to these questions is, “I’m not sure,” then you are not going to get picked. It’s as simple as that. Let’s remedy that.

Today’s successful writers are entrepreneurs. While this may seem intimidating at first, the good news is that building a business around your writing doesn’t have to happen all at once. It can be built little by little, in stages. Here’s a blueprint to get your content strategy in order, connect with the right people, and form a supportive community.

Today’s publishing industry takes fewer chances on new authors. Having a strong author platform is one way to show that you are a low-risk investment. Why has this gotten even more important to publishers? Let’s take a look at the shift in power dynamics and what it means for authors trying to get signed. 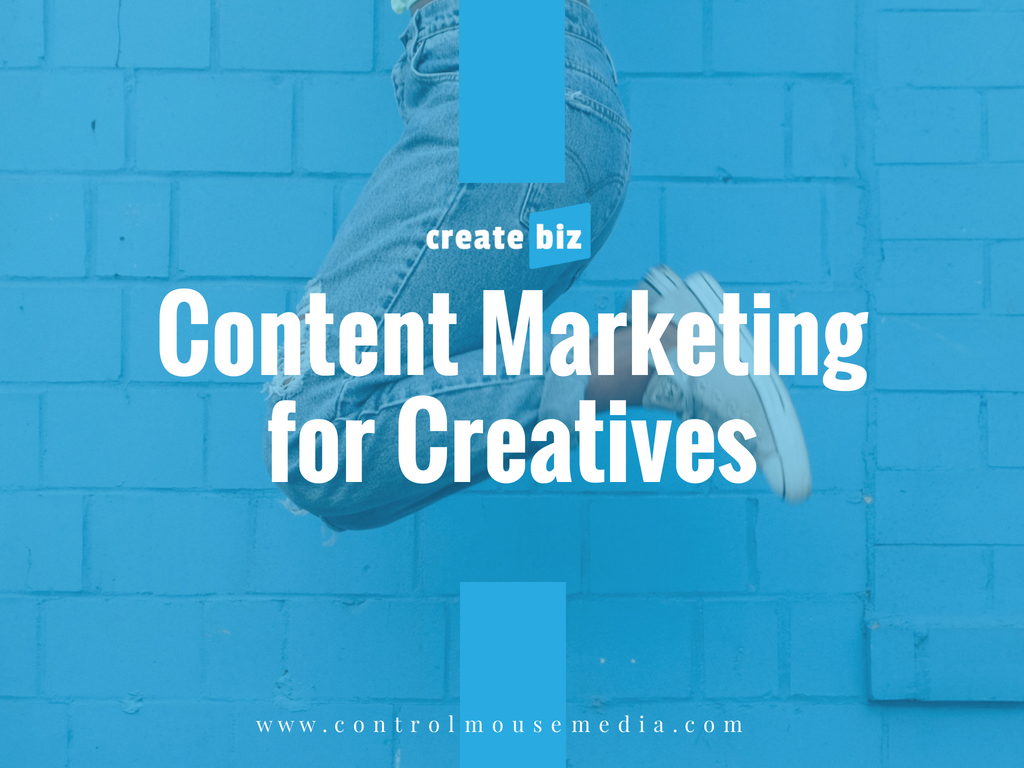 A complete online course to help writers, musicians, and visual artists build a business around their creative work, focused on the most difficult part – marketing. The course is 42 video modules, with dozens of worksheets, templates, and checklists to help you get focused and efficient in building an audience. Learn more>>

Podcast: Marketing Without the Marketing 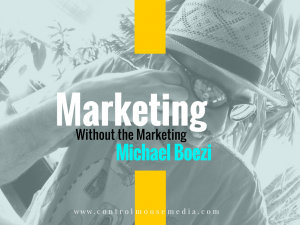