At the beginning of a business relationship, you might get asked to sign a Non-Disclosure Agreement (also known as an NDA).

These are very standard, especially in the startup world. Someone has a new idea, and is trying to capitalize on that idea. They don’t want someone to come along and swipe the idea and run with it.

It may seem counterintuitive, but the NDA request is always a red flag to me. Asking for one shows a lack of confidence in your ability to execute – and sends a mixed message as well:

Obscurity is the enemy, not “stolen” ideas. New ideas are a dime a dozen, it’s always the execution that counts. Getting all protective isn’t going to buy you enough time to execute.

Episode 107 takes a deeper look at non-disclosure agreements – pros and cons. And if you’ll suspend disbelief for about 15 minutes, I’ll make my case against them – both from a relationship standpoint and a practical standpoint.

Listen to the episode here or subscribe in iTunes (or your favorite podcast player). 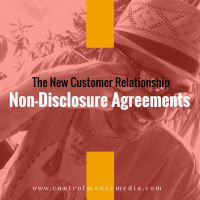 Non-Disclosure Agreements: Mistrust Is Not a Good Starting PointMichael Boezi

Here are links to the articles I mentioned in the episode:

The Only Three Platforms That Will Help You with Organic Reach

Maintaining Control of Your IP

A Discount Is Not a Gift

Right to a Response

The Digital Representation of You (Episode 200)

No One Cares About Us

LinkedIn Is a Tough Scroll

How to Ruin a Good Customer Relationship

Stop Mimicking What Marketers Do

How to Change My Mind

Consider the Source: Extending the Scope of this Show

Using a Podcast to Create an Audiobook

Promoting and Syndicating Your Podcast

Setting Up and Launching Your Podcast

Scripting and Recording Your Podcast

Podcasting as a Strategy for Writers

Why Black Lives Matter Is Such a Powerful Slogan

We Need Marketing More Than Ever

Refocusing When Focusing Is Difficult

How to Support Small Businesses During the Coronavirus Crisis

How Small Businesses Can Survive the Coronavirus Crisis

Domain Renewal Scams: How to Avoid Them