This week’s episode is a reprise of Episode 14, with a new introduction.

Like last week, I’m doing this because it relates directly to a current thread in the show. Next week’s episode will be new, called “Non-Disclosure Agreements – Mistrust Is Not a Good Starting Point.” It’s a topic I’ve been wanting to write about for a while, and it fits nicely into my upcoming series called The New Customer Relationship.

Episode 14 was called, “Ideas vs. Execution,” and it’s one of my top 10 most-downloaded episodes. It also serves to put next week’s topic into context. In short, it’s about how to pick the right idea to bank on, how to develop it, and how to assess whether or not the idea is succeeding. An idea, by itself, is not worth much. It’s what you do with the idea that counts. It all comes down to execution.

One of my favorite quotes that highlights the importance of execution is from Tim Wu in his book, “The Attention Merchants.”

In business, invention is often said to be overrated as compared with execution. Perhaps the best proof of this idea yet to be offered by the twenty-first century is the success of Facebook, a business with an exceedingly low ratio of invention to success.

Ideas are a dime a dozen, even the great ones. If it’s all about the execution, the “protection instinct” isn’t going to help you. It’s actually going to slow you down.

Listen to the episode here or in iTunes, and then come back next week for my rant on NDAs. It should be fun – please subscribe if you want me to remind you! 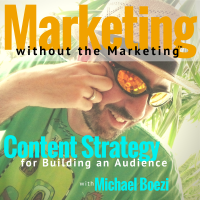 My thinking is heavily informed by The Lean Startup

by Eric Ries – especially his well-known MVP concept, but also his idea of avoiding “success theater.” It’s a seminal book, a quick read, and something I recommend to my clients, my students, and the first-time founders that I mentor.

Please note that both of the books mentioned here are Amazon affiliate links. I’d recommend them even if I didn’t get a couple pennies from Amazon, but I believe in full disclosure just the same.

The Only Three Platforms That Will Help You with Organic Reach

Maintaining Control of Your IP

A Discount Is Not a Gift

Right to a Response

The Digital Representation of You (Episode 200)

No One Cares About Us

LinkedIn Is a Tough Scroll

How to Ruin a Good Customer Relationship

Stop Mimicking What Marketers Do

How to Change My Mind

Consider the Source: Extending the Scope of this Show

Using a Podcast to Create an Audiobook

Promoting and Syndicating Your Podcast

Setting Up and Launching Your Podcast

Scripting and Recording Your Podcast

Podcasting as a Strategy for Writers

Why Black Lives Matter Is Such a Powerful Slogan

We Need Marketing More Than Ever

Refocusing When Focusing Is Difficult

How to Support Small Businesses During the Coronavirus Crisis

How Small Businesses Can Survive the Coronavirus Crisis

Domain Renewal Scams: How to Avoid Them